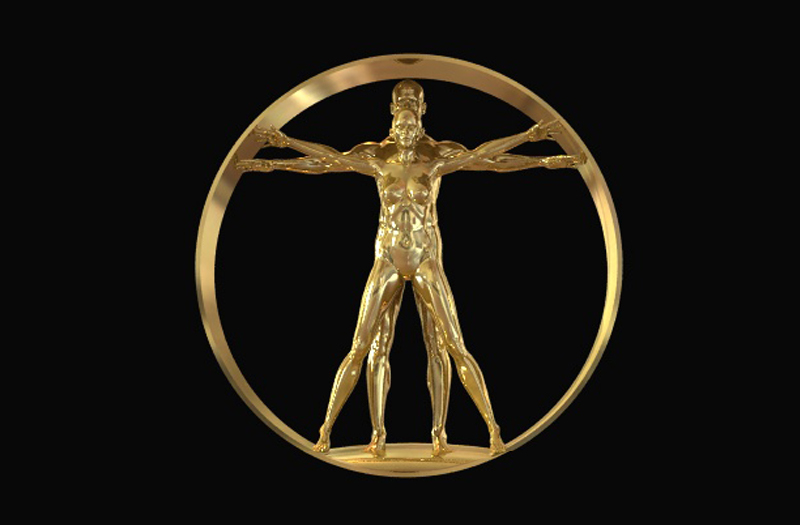 Neoclassical pop art logo celebrates the rare reunion of Arts and Science within the age of digital globalization and the emerging computer science enabling transcribing images into mathematical language.

Centered in a Kinetic Art Spiral, the Neoclassical Pop Art account of the Vitruvian Man provides a Time Traveler. Bridging the prestige of the Old Masters art, mathematics, and philosophical principles with contemporary art, digital mathematics of visuals seen on-screen, and today metaphysical and spiritual concepts impact on our immediate lifestyle, personal development, and growth.

The upward spiral used in our logo embodies sacred geometry used in Science, Optical Art, and Yoga offering you a focal point for focusing and harmonization of the mind, which can lead to mindfulness, body and soul regeneration, and creativeness. 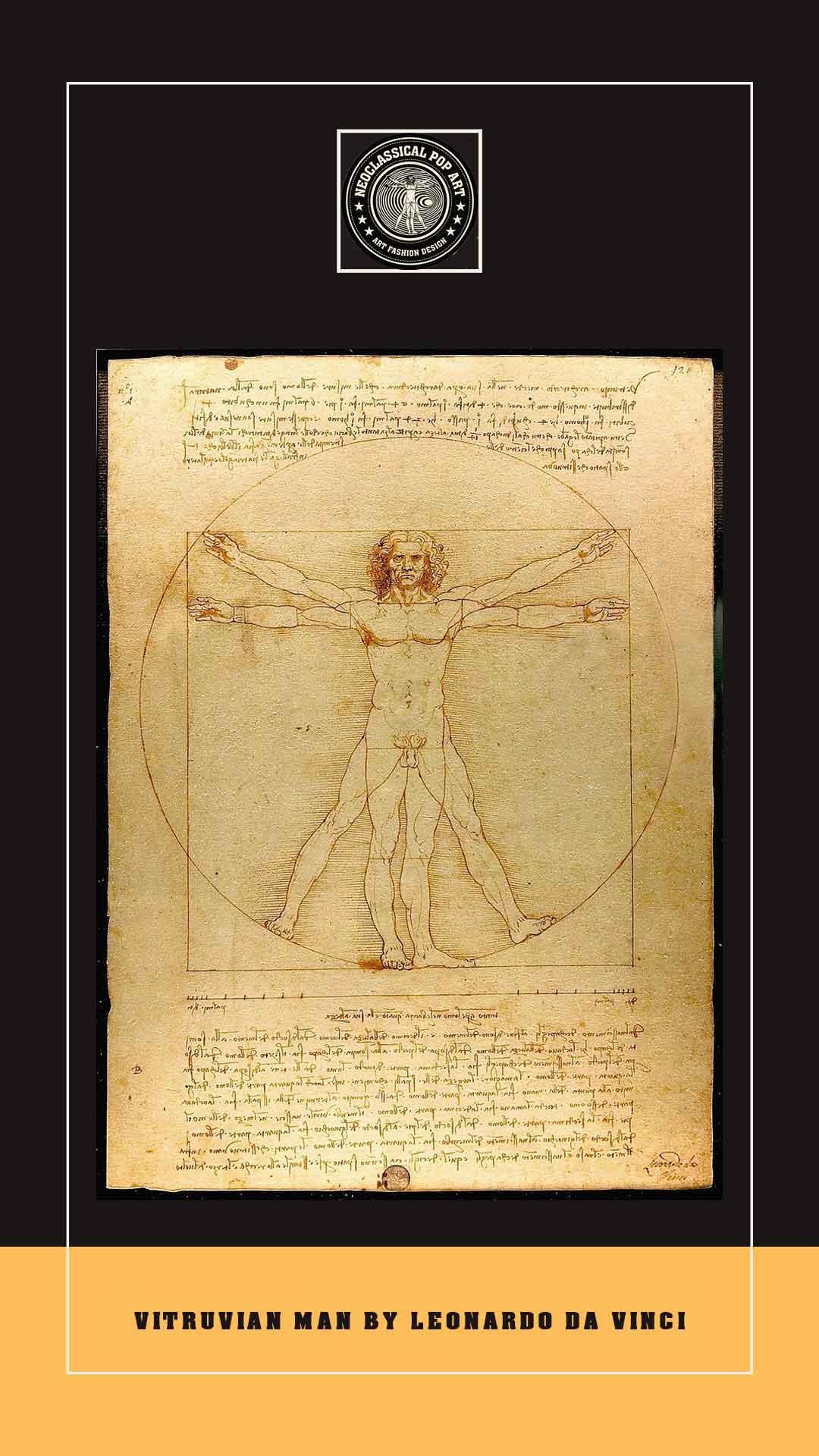 Although the drawing is widely associated with da Vinci and regarded as one of his most reputable drawings, also the foremost researched drawing within the world,  its origin comes from Vitruvius, a Roman Architect, Engineer, and Artist combined, living 1500 years earlier.

Vitruvius lived in ancient Rome during the first century BCE. His Ten Books compilation titled "De Architectura" are the first and only publications of classical antiquity Architecture left exclusively demonstrating the "Golden rules" throughout the traditional Ancient Western Culture. 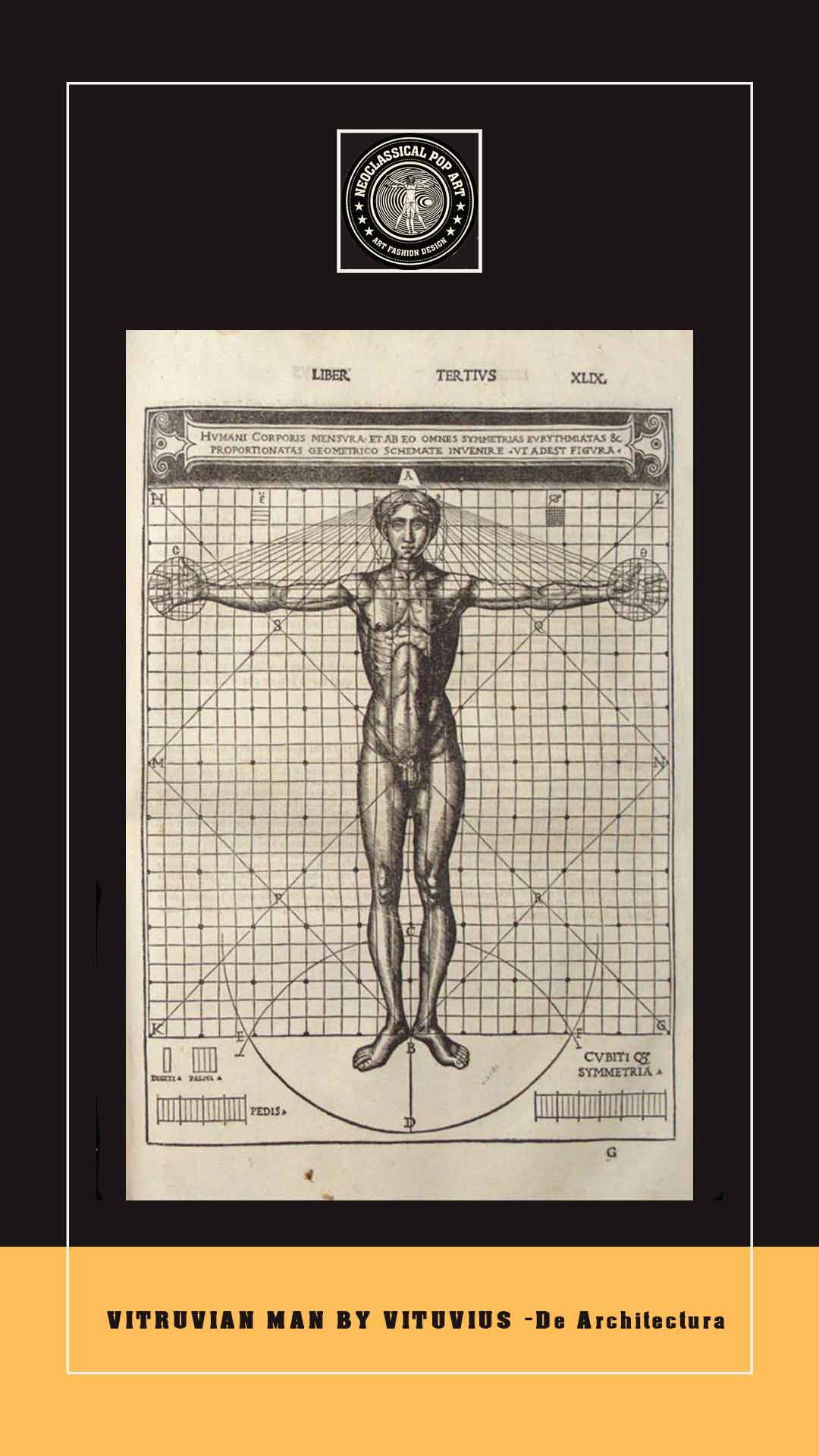 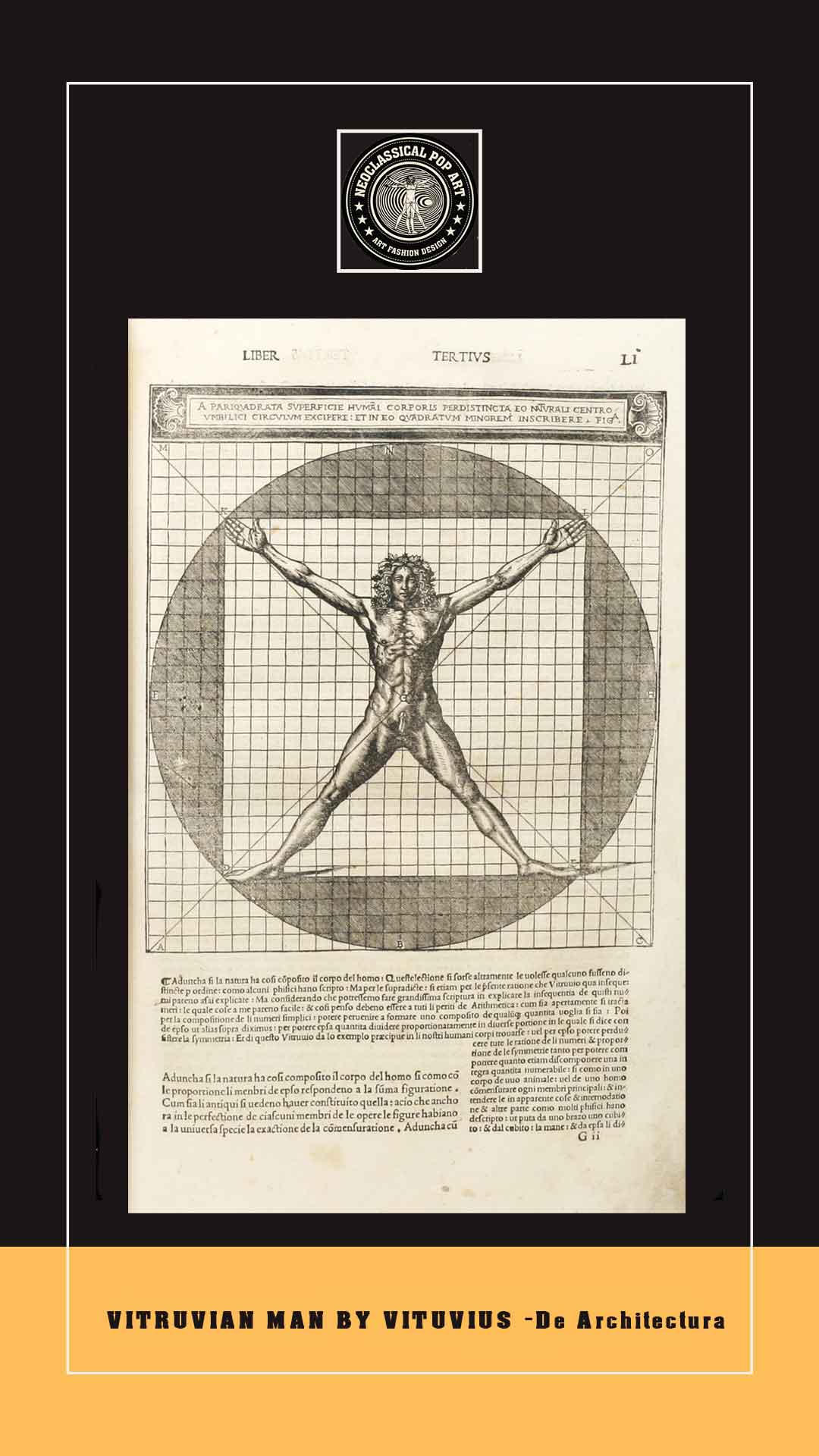 Vitruvius held as a role model for the Renaissance artist-engineers, and de architectura instructive teachings served as a 'bible' within the creation of their scientific innovations and artworks based on a Hellenistic belief of the unity of knowledge. 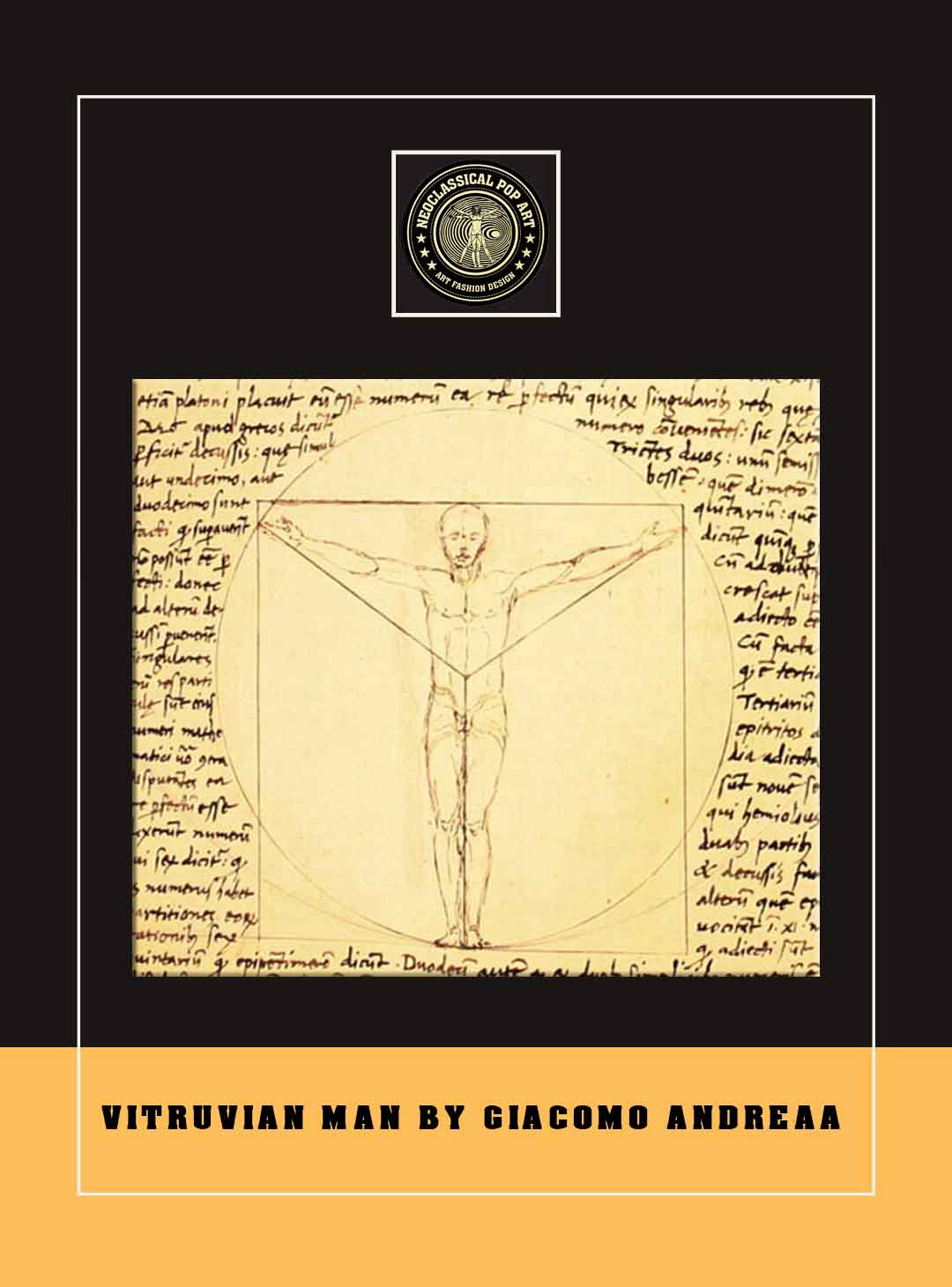 Vitruvius's precise formula portraying the perfect proportions of the human body, blending Mathematics and Art, motivated the Classical Renaissance artists to explore the rules provided in his writings, creating in their artworks the symmetry and harmony that we all adore.

"Proportion is the mutual calibration of each element of the work and of the whole, from which the proportional system is achieved. No temple can have any compositional system without symmetry and proportion, unless, as it were, it has an exact system of correspondence to the likeness of a well-formed human being." Vitruvius

Vitruvius's instructive theories draw the mathematical proportions of the human body in ratio to the ancient temple structure can only be accomplished by drawing the human body within the linear perspective of a perfect circle and a square.

Vitruvius symmetry and proportional dimensions of the complex human body structure noting its center and midpoint in the navel, lay the framework to all classical art models, as perfectly demonstrated in Leonardo's drawing of the Vitruvian Man.

As you can see, even though Leonardo's drawing is the most impressive and accurate translation of Vitruvius's instructions, it is not the only one. Vitruvius's historic instructions were tried by many Renaissance artist-engineers, and architects seeking perfection in their creation of a proportional human body.

One can say that Vitruvius's guidance prevails as the foundation of the later Western culture anatomical drawing and painting of the human body.

Taking it one step up, from a spiritual and metaphysical perspective, the circle symbolizes Absolute Knowledge and Supreme Truth in relation to the square symbolizing relative knowledge resulting the perception of the world of objects. The Supreme truth, i.e. enlightenment or the State of Wisdom, is reachable only by the man-centered within the circle of oneself. A state achieved by Leonardo that can be easily recognized reading his writings. 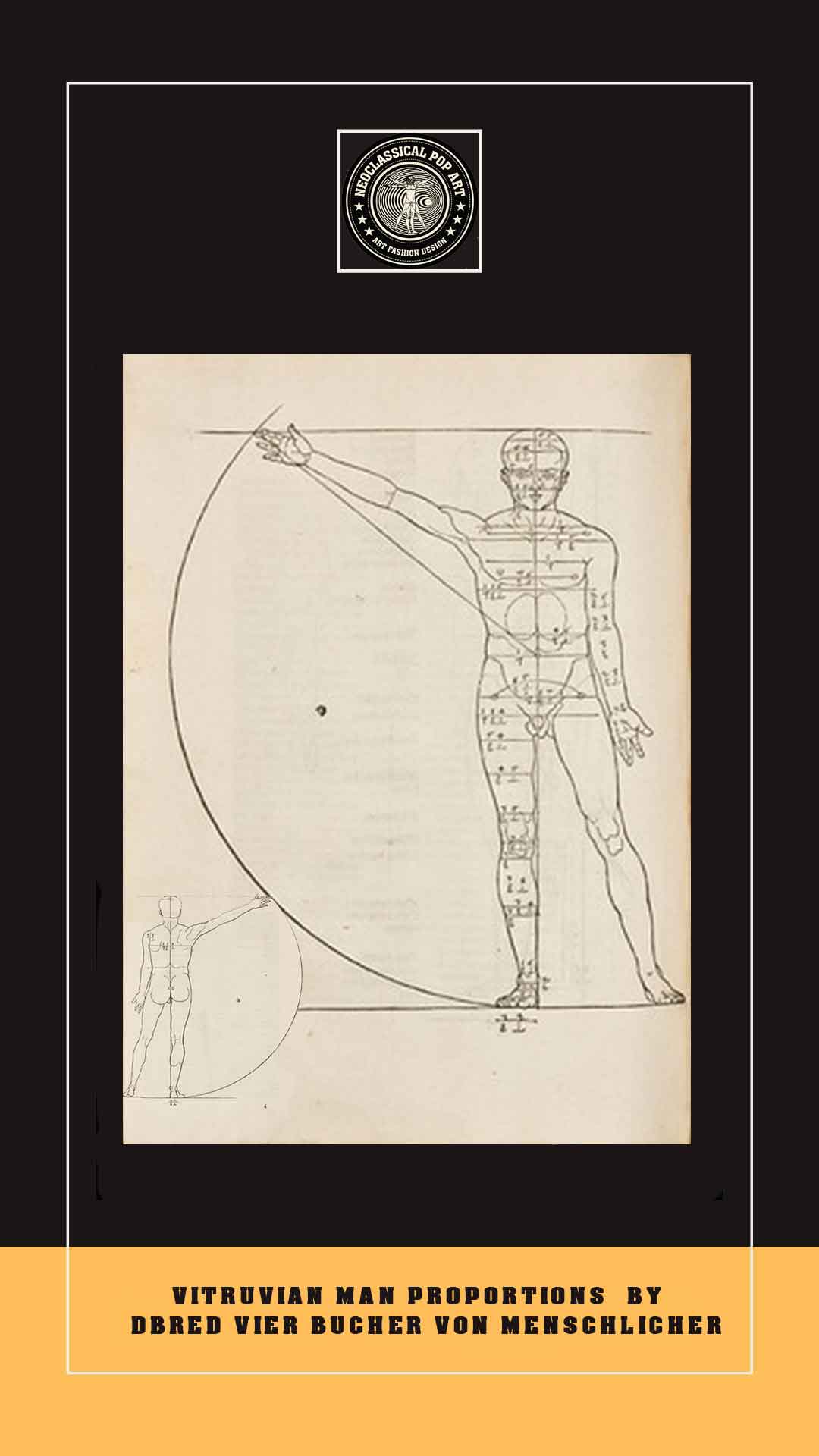 Time evolves all and the Neoclassical Pop Art Logo adds to the masters enhancing art and science throughout the digital era, bridging the genius of the Old Masters art, science and mathematical principles with contemporary art and digital mathematics of computerized visuals seen on screen. 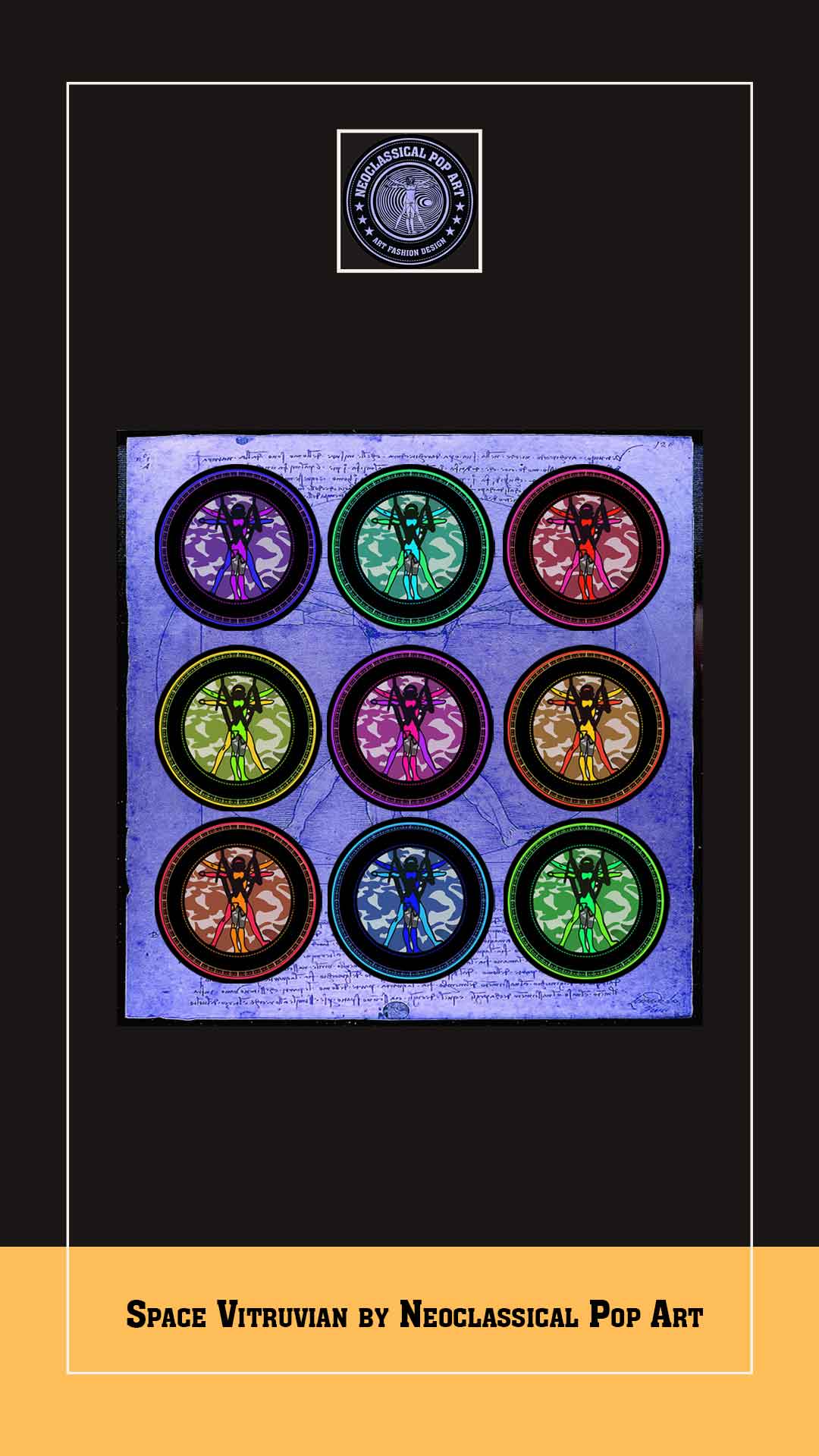 Our logo is a Pop Art playground served to you on each of our items in endless vivid colorful variations 1800 years later, and just in time to celebrate the crux point of the emerging IT Science as Cyber Art. And in the words of da Vinci's: "Art is never finished, only abandon".

We are here to pick up that which was abandoned and put it back into effect and practice.  Once more bringing forth the perfect harmony which leads to a mastery over the mind, call it Digital Renaissance.

It'll probably happen again  a thousand years from now, because art, just like the spiral in our logo, is never finished only abandoned for a while. And that's what infinite ethical appropriation art is all about.

Seize an opportunity to own a piece of art with great historical value. A Brand created by PriYa, owner of Neoclassical Pop Art, Versatile Artist-Engineer and sole female artist in all of humanity, creating a novel painting expression. A rising Digital Renaissance artist. It is certain to rise in value, so your ROI is guaranteed.